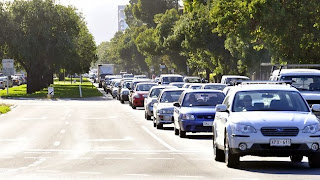 Despite quite a large article and quotes from what appeared to have been an interview with our CEO regarding a congestion tax this has not been the case. In Council's recent submission on the Integrated Transport Plan one of the suggestions, among many , was the idea of the use of congestion taxes, not for Unley Rd in particular, but as a means of encouragement for people to use main roads or public transport. This would then allow better traffic movement for those who carry out their business or day to day lives in areas that could become congested. The report was endorsed by Council. The link to the article is as follows;
http://www.adelaidenow.com.au/messenger/east-hills/unley-council-chief-wants-state-government-to-tax-motorists-to-reduce-congestion-on-our-roads/story-fni9lkyu-1226783842022
Posted by Jennie at 11:15 AM