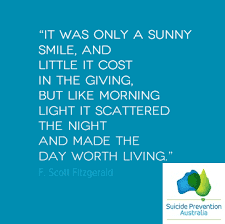 If suicide has affected you or you just want to have your say. A sobering topic but close to home for too many.

Many South Australians have been affected in some way by the death of a person who has taken their own life. Suicide is the leading cause of death for South Australians aged 15 to 44 and the numbers over recent years are on the rise.

The issue of suicide is complex; rarely resulting from a single cause. Understanding the problems helps us understand the solution.

Help shape the new South Australian Suicide Prevention Plan 2017-2021 by providing feedback and telling SA Health what you believe is important to include in the new plan.

Visit www.sahealth.sa.gov.au/suicideprevention to view the plan and provide feedback by Friday 19 May 2017.