On Monday 21st City Strategy meeting Item 3 was to discuss the motion that I brought forward at November's meeting; to accelerate the footpath replacement programme. The report can be read at http://www.unley.sa.gov.au/webdata/resources/files/Item_3_CSP_February_2011.pdf .

This seemed to be a consensual view from those who emailed me, many were happy with further acceleration, one or two would have liked a lot more information and one to continue at the present rate (completion 2042). This motion received the support of all but one Councillor. I hope that this is the start of getting things moving more quickly, however, it is one small step and there will be many more if the acceleration is to begin.
Posted by Jennie at 8:50 PM 3 comments: 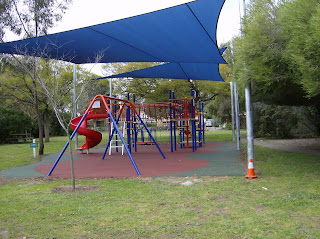 Support for
smokes ban
A PROPOSED ban on
smoking in public playgrounds
has ignited debate
but Unley councillor
Jennie Boisvert says
she has received only positive
responses.
"Most people say 'who
would think they could
smoke in playgrounds
anyway'," Cr Boisvert
said. She said she proposed Dora Guild Playground
the ban after a suggestion
in a Heart Foundation
magazine.
Cr Boisvert was successful
in having the council
consider the smoking ban
at last month's meeting.
Heart Foundation SA
chief executive Geoff
Halsey said almost 90
per cent of people were in
favour of no smoking in
open places, according to
a Cancer Council survey.
"It also sends messages
to young people, particularly,
that there is nothing
normal (and) nothing cool
about smoking," he said.
A report on Unley Council's
power to ban smoking
in public will be presented
to an upcoming meeting.
Messenger 22nd February
Smoking bans backed
LETTER OF THE WEEK
CONGRATULATIONS on Unley
Council proposing a smoking ban
from playgrounds and parks
("Butt out", Eastern Courier Messenger,
February 9).
It would be great to see the al
fresco dining experience not be
ruined by people lighting up!
Plus it is well documented that
cigarette butt littering has an environmental,
economic and social
impact on the community so butting
out would be a positive step.
We reside opposite a beautiful
Burnside park which contains a
playground.
Just recently we purchased a
new puppy.
Very excited we walked her in
the park. Located around the
bench and playground in the park
was a scattering of cigarette butts.
I became very aware of these butts
because our young puppy was trying
to eat them.
I remember when our children
were young how careful one had to
be that your small child didn't put
things from the ground in their
mouths.
I was surprised to witness children's
caretakers smoking around
the play ground while watching
PLANS: Unley councillor
Jennie Boisvert is behind
plans to ban smoking in Unley's
playgrounds.
their children and flicking the
butt on the ground. I sincerely
hope that if Michael Marzano has
to smoke and share his passive
smoking while non smoking patrons
are trying to dine and enjoy
the alfresco experience that he at
least disposes sensibly of his
cigarette butt and has private
health insurance.
SHARON PUGH
Hazelwood Park
Posted by Jennie at 5:09 PM No comments:

`POOR IDEA': King William Rd diner and smoker Michael Marzano.
SMOKING would be banned from Unley’s playgrounds and sections of parks, under moves being considered by the local council.
The proposed ban, which would include the playground at Unley Oval, would also see cafe owners encouraged to forbid smoking in their al fresco dining areas.
Unley councillor Jennie Boisvert successfully called on her fellow elected members to consider the ban at last week’s council meeting.
She wanted places where children were present - including all playgrounds and designated parts of parks and recreation areas - to become smoke-free.
“I get the impression that people with young children are becoming more militant about not wanting smokers near them,” Cr Boisvert told the Eastern Courier Messenger after last week’s meeting.
“We are going to investigate all parks, but what portion of them will become smoke-free will be decided by public consultation.
“I would be happy to ban smoking and not sell cigarettes in shops, but I understand it’s all little steps. Eventually we could have a nicer place.”
She also wanted to see lower council fees introduced for cafe owners and publicans who made their outdoor dining areas smoke-free.
“If you had asked me in the ‘70s if it would happen - when people were smoking in cinemas and staff rooms at schools - I would have said no.
“But with all these bans, we are gradually pegging away and making it less and less social to smoke.”
Cr Bob Schnell supported the ban, but said it would be “impossible” to police.
“A lot of people will violate the rules but they won’t get caught.
“I predict it will go nowhere, mainly as it will be very difficult to enforce.”
However, Cr Boisvert said the ban was more likely to be self-policed by residents.
“If there are signs on the playground and a person is smoking next to a parent’s child, it gives them a right to say something,” she said.
“It gives people that power, like now if people light up in a restaurant, they get told off.”
Cancer Council chief executive Brenda Wilson applauded the move.
“This is a great opportunity for Unley Council to lead the way in the health interests of its citizens,” Ms Wilson said.
“Playgrounds are no place for smoking (and) ... smoking within al fresco dining areas is hazardous to all in proximity.”
King William Rd diner and smoker Michael Marzano described the move as a “poor idea”.
“It robs people of their freedom of choice when we live in a democratic society,” Mr Marzano said.
“Smoke outside disappears into the street or air and people can just move away.”
Council staff will investigate issues surrounding implementing the ban.
Elected members will vote next month on whether to lower fees for smoke-free outdoor dining areas.
- Lisa Bachmayerbachmayerl@mng.newsltd.com.au
Posted by Jennie at 5:43 PM 2 comments:

We discussed many issues. You can view the minutes at http://www.unley.sa.gov.au/webdata/resources/files/FCM_Minutes_January_2011.pdf
The ones that seem to be of most interest are;

Several Councillors had Motions on Notice, these included;

Posted by Jennie at 6:11 PM No comments: