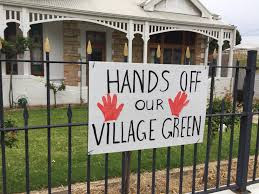 You may remember that the Development Plan for this area is being upadated. Public consultation has aleary occurred, representations written and heard by the Ciry Development and Strategy Committee (CDSC). Council staff have worked tirelessly to collate the feedback and to provide Councillors with a way forward. This was discussed at  a recent Council briefing. Following that meeting the Mayor decided that further discussion was required befotre the matter went to the CDSC that was to meet thistrhis week. Instead a further briefing will be held on Monday, March 6th, followed by the postponed CDSC  on Tues, March14th. The matter will then be endorsed or further amended at the full Councl meeing on March 27th. From what I have heard I am hopeful that the revised plan will be more suitable to the vast majority of respondents.
I understand that there is a meeting organised at the Village Green next  Sunday , 19th March, 4pm-6pm) by residents who wish to discuss the proposed future of the Village Green. I can't  do more than to reitereate that I will not support a reconfiguration of the green and that I would like to see as many of the cottages as possible protected by zoning. However, on the western side of Unley Rd I will support reducing the current height limit (20+storeys) to something more reasonable which could be as low as 2 storeys and as high as 10.
I make this decision based on feedback from the proposed Black Forest rezoning when residents told us very clearly, 'not in Black Forest, surely Unley is more central and suitable?'.
Posted by Jennie at 6:04 PM