The magic of the playground

Not long ago I was at the playground in Forestville  Reserve (near the pool) to fill in some time between our train and tram trip on the way to Glenelg. Also at the playground were other grandparents with a child and a young Mum with her young daughter. It wasn't long before the boy had  his grandparents sitting under the structure in his train, the boy was driving and they were enjoying the ride. My granddaughter wanted to join in and decided to get on the train and really enjoyed the ride as well. Soon enough she asked if it would be OK if she drove the train for a bit and the boy became the conductor. They had a ball tooting imaginary horns and hanging out of windows. The other little girl joined in in due course. When it was time to leave the children seemed to be firm friends and walked back to the Forestville tram stop  holding the grandmothers hands and waved us goodbye. The moment was magical and no doubt happens everyday in every playground. 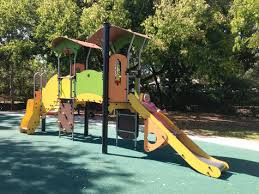