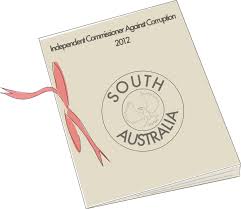 In Monday's paper there was an article about the need for Councillors to set their own Code of Conduct rules. This is what we always did until an over authoritarian state government decided, in in 2013, that they were better at doing this than we were. And so they passed a law about it that allowed Councillors little freedom in the way that they went about their work and much stricter rules of conduct that they had for themselves. It comes back to the old adage that Councillors and Councils are a waste of time and money. Not true, of course, but we keep on getting it.


Nevertheless, giving Councils back the power seems like a good idea. ICAC has been flooded with trivial matters from councillors about the behaviour of their colleagues and feel that we would be better off monitoring the discipline of each other. As far as I am aware Unley has had a couple of these investigations in addition to my complaint about the behaviour of our Mayor early in his first term of office. The problem, as I see it, is that Council will still not have the power to do anything more than a ‘slap on the wrist’.
It’s a bit like me suspending a student for repeatedly wagging lessons by not allowing them to be at school at all for a day or two. We both see the irony but I can only use the rules available to me!
Posted by Jennie at 9:48 AM