Lone whingers or a lone voice for the silent majority? 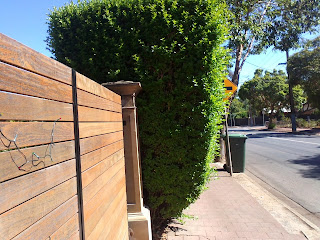 This week's article in the Advertiser got me wondering. I was annoyed that they used a Goodwood Saint's football example as the whingers when this matter is legitimately before the courts.  I am also concerned that people who make genuine complaints are often seen to be whingers. Every time I get an email from residents they have a genuine concern: sometimes I know the answer and sometimes I need to ask Council staff to provide one. I never consider their inquiries to be a bother: I was elected to be a voice for the community and I take that responsibility seriously. However, I am concerned that the state government is gradually whittling away resident's opportunities to express their concerns regarding development.
Sometimes the lone complainant has a genuine concern that is also bothering many people who are not prepared to complain. It's interesting when door knocking, some people have a list just in case you knock and others seem more than happy with just about everything. A hedge that is growing over the footpath has not been a bother enough for anyone to email or call me and yet 2 residents have made the same observations and complaint. The encroachment of the hedge is probably annoying dozens of people every day.
Posted by Jennie at 10:00 AM