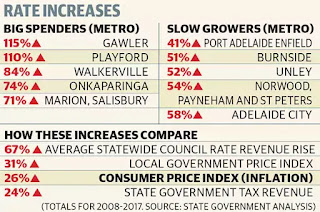 This is the saving that Minister Knoll estimates that would have been saved on your Council rates if rate capping had been imposed 10 years ago. This sounds good but it assumed a 6% rate rise every year during that time. Unley's rates certainly haven't increased by this amount in a long time. I can find statistics that show that housing prices in Unley (suburb) have increased approx 70% in the last 5 years (725K to 900K) and that rates have incresed 52% in the last 10 years.
The bit that was missed is that even with a capped rate of say 2% your rates could go up more or less than this depending on how much your home increased in value at the same time. If your home increases in value more than the rate increase then your capped rates will still go up by more than 2%!
One last thing, if you actually were paying $500 less what would you want to take out of the budget so that it can still be balanced? I know some would start at the Gourmet Gala (I think it will have run its course next year) but what are you going to cut  to get the other $8,700,000 out of?
Posted by Jennie at 6:21 PM