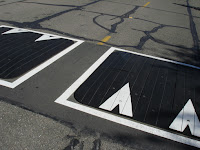 Why are these devices so hated in Byron Road?


I received a petition from the residents (signed by over 50 in the street alone) in this street outlining the problems with them including;


The petition has been presented to Council and will appear in June's Agenda. The information in it was the very reason that Don and I were able to get some money into the budget 2011/12 for a traffic study in the area.

This weeks Council Agenda has items on;

I am looking forward to the meeting of the Clarence Park Community Centre Board on the 25th May.