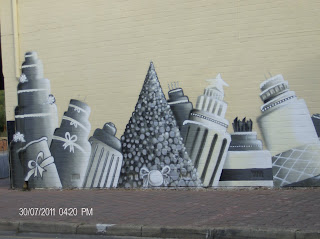 I noticed that this has been finished on the corner of Grantley Eve and Goodwood Rd, it looks great and should deter graffiti. A development application had to be lodged with Council and the owners got the go ahead last week.

I attended the Centenary dinner for the Goodwood Saints last weekend, it was well attended and well organised. it was good to see the level of commitment from local people and past and present players and their families.


I also attended the Clarence Park Community Centre July meeting. It is in good financial shape judging from the preliminary end of year figures. for those who are interested the AGM will be on September 28th at 4pm at CPCC. The new partnering agreement with the Council is ready to sign.

This month the following should be of interest;