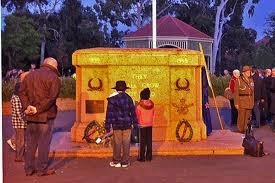 This morning I attended the dawn service at the Memorial Gardens. Each year there would seem to be more and more people attending. By my estimate there were well over 2,000 people there at 6am when the service began. As usual it was a moving tribute to our men and women who have died at war, served in the armed forces or lost loved ones in wars. It gave me time to reflect on my own father's service in the Navy during World War 2.  He said he chose the Navy as that way he would always know where his bed was!
Posted by Jennie at 12:59 PM