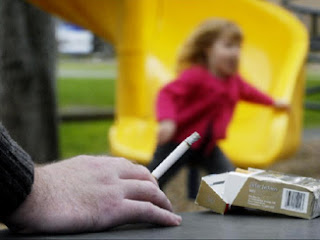 The following article appeared in this week's Eastern Courier. I will be interviewed next week for a segment on ABC television. I feel at this time that a greater take-up rate will occur when renewals are due for the outdoor dining spaces.

Eastern Courier Messenger
Wednesday 2/11/2011
No-smoke bid fails
UNLEY Council's bid to encourage smoke-free outdoor dining areas has failed to win over local restaurant and cafe owners. In August, the council announced owners would receive a 50 per cent reduction in outdoor dining fees if they chose to ban smoking. But, as yet, no businesses have taken up the offer. Councillor Jennie Boisvert, who supported the bid, hoped café owners would still get on board. "I think the initiative needs more education," Cr Boisvert said. "A lot of the restaurants don't realize how many customers they don't have because of smokers outside." Adelaide City Council, which launched a similar scheme in July, has had 58 businesses take up the offer. An ACC spokeswoman said the savings on outdoor dining permits ranged from $120 to $1350 annually.
Posted by Jennie at 5:32 PM