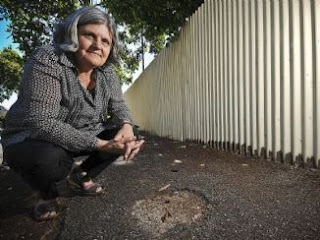 It is evident from the formula that Council uses that they believe some streets are less trafficked than others. As you are aware Meredyth Ave had been scheduled for 2012/13 and I believe in an accelerated programme that it is unacceptable for this street to have the date for replacement moved back to 2015/16. I am working with staff on this one to ensure it is still completed as promised. The other streets in contention are Hammond St and William St. Hammond is now scheduled well ahead of the 10 year wait that would have occurred. However William is still not listed in the near future and is in an appalling state. I will continue to endeavor to have this one included in 2013/14 as I feel that the 2 streets listed are not a realistic share for Goodwood South.
During the election campaign I made a promise that if Les Birch and I were elected these streets would be a top priority. I have almost succeeded in getting the acceleration from 2042 to 2019 for full completion of the paving. However, as you are aware Les was not elected as Mayor and working with the elected Mayor got off to a pretty rocky start due to his behaviour. I'm doing the best I can in the circumstances. I have Don's full support in this and we will continue to work together to get as many footpaths as we can in Goodwood South completed.
Posted by Jennie at 6:13 PM