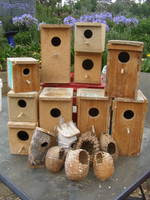 Council had 28 artificial hollows/boxes installed in 2009. Most were erected in Ridge Park and Heywood Park. On a recent inspection it was found that many of these boxes are now providing a home for a variety of native species. These include Ringtail and Bushtail possums, Lorikeets and Eastern Rosellas. There was also evidence that micro bats had been using one of the boxes. More boxes will be installed in other locations later this year. Hopefully this project assists in some small way toward the breeding of native species.
Posted by Jennie at 6:02 PM