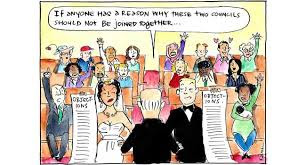 Once again Council amalgamations seem to be on the agenda in South Australia. The Property Council's  report in Monday's paper was not off to a good start when it quoted projected savings after the voluntary amalgamations that occurred over 20 years ago. The projections looked good at the time  but a report as never been written into what the actual savings were. If the comments in today's paper are any indication they certainly did not leave happy ratepayers behind them. According to the report the monies saved were in less CEO's, fewer Councillors and shared services. Well, Council's already share services where cost savings can be achieved and are always looking for new opportunities to do so. While many would argue that the CEO is well paid and we, as Councillors, don't do it for nothing, in the general scheme of things this, at least in Unley, would save less than $400,000. This amounts to  $200 per  property. If we were to compare to new South Wales or Queensland the new CEO of an amalgamated Burnside and Unley (as a hypothetical notion) would want  double and the Councillors would be paid as if they were doing a full time job. Even with half the Councillors the savings would be negated very quickly, in fact the costs would increase.
If the state government actually believes fewer Councils would be more cost effective then they need to have the courage to realign boundaries on communities of interest and pay little or no heed to existing boundaries. In the end it won't be cheaper and your rates will continue to go up and you  will also have lost the local in Local Government. You will be voting for your Councillors on Party lines and you'll get the same type of people as you see in our current politicians and not the type of people you have now. We might argue and debate but everyone of us has your best interests at heart and not our own.
Posted by Jennie at 9:57 AM