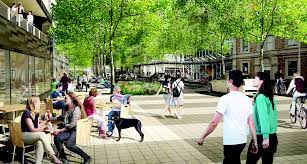 This is a newly convened committee but looks similar to the last one. Some different councilors and a new chairperson, Michael Rabbitt. As you may be aware Council has been consulting on potential changes to the zoning in the Unley central area. The section of Unley Rd between Thomas/Edmund Ave and Mary/ Frederick Ave. This area currently has no height limits but was not included in the initial Unley Rd DPA: the rest on Unley Rd is already zoned to 5 storeys with the first approved building coming in at 9 (the now failed Cremorne Plaza).
The meeting on Tuesday is to listen to the people who made submissions that would like to also be heard to add to their submission. Overall 294 public submissions were recieved, 9 from agencies and 1 from a Member of Parliament. While some are in favour of the overall concept the vast majority appear not to be. There is also much confusion about the staus of the area bounded by Rugby, Unley, edmund and Oxford. Many of the submissions talk only to this rather than the entire precinct. For me it is time to listen, to debate and discuss before making a final decision early next year.
Posted by Jennie at 1:27 PM