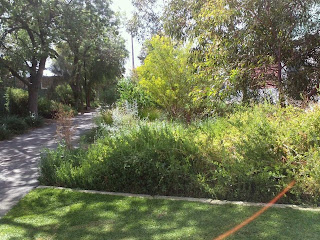 Below is a copy of the article in this week's Eastern Courier. While Daniel does have his facts correct he could just have easily titled the article Compromise possible for Kelvin Ave. I reiterate that money not spent on landscaping this street will be spent landscaping a different street. Money allocated to each area of the budget is spent in that area. Why would you not want to have your street look like the photograph and retain two way access if that was the an available option?

Road close row
IT IS less than 60m long and10m wide, but plans for a little parcel of Clarence Park land have created a very big fuss. Unley Council has revised the design of a small park on Kelvin Ave after more than 200 people signed a petition calling for the plan to be abandoned. Under the original plan, Kelvin Ave would have been closed to traffic between East Ave and Frederick St to create the public park, but residents were concerned the closure would lead to traffic congestion in nearby streets. Elected members voted at last month's council meeting to revise the plan by narrowing Kelvin Ave with a twoway driveway link for traffic to pass through. The entire pocket park area would be 450sq m and cost $86,000. Frederick St resident Dorothy Karagiannis, who was one of the people who signed the petition, questioned the need to do anything to Kelvin Ave. "What will the new design achieve?" Ms Karagiannis said. "That money could be spent on lights, bitumen, gutters and kerbs, tree maintenance and street sweepers." Frederick St resident Esme Fitzpatrick said to "leave Kelvin Ave as it is". "It's getting ridiculous, "Mrs Fitzpatrick said. "All the money to have this done will be a waste." But Unley councilor Jennie Boisvert, who moved the motion for the new Kelvin Ave plan said "the two-way driveway link should meet the needs of everybody". "It will be a green space where you can sit back and relax and it will be shady and pleasant," Ms Boisvert said. "It will look more aesthetically pleasing than a road." Community consultation will be undertaken on the revised design and presented to the council at its December12 meeting.
In DANIEL FRANGOS
Posted by Jennie at 12:24 PM