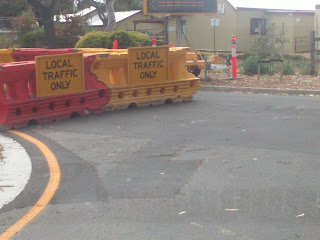 From the most recent flier. I tookthe photo before I recived the flier. However, I believe those most affected were advised earlier.

The Goodwood Rail Junction Upgrade Project involves separating the existing freight rail line and Belair
passenger line from the Noarlunga passenger lines. Construction of a rail underpass near
Street will enable the Noarlunga line to be lowered below ground level with the freight and Belair lines
above.
Completion of this project will provide a range of significant benefits for the Goodwood and Millswood
communities.
Upcoming works include:
· Drilling works to install a new sewer connection between and
Avenue (under the rail lines). This new sewer will then be installed via open trenching within the rail
corridor adjacent to Cromer Parade. Pipes will be temporarily stored on . This will
result in the temporary closure of this intersection to all through traffic, including cyclists, until
February 2012, with detours in place.
Construction vehicles will access the Cromer Parade site via Street and
.
· Tree removal will be undertaken on Cromer Parade, predominantly between
and . Residents adjacent to the Cromer Parade sewer realignment works (and
other interested stakeholders) will be consulted in regard to the landscape planning for this area.
The project team will revegetate this area as soon as possible after these early works are
complete.
· Establish the project site office and storage area at the Adelaide Showgrounds on .
· Installation of cycling and pedestrian detours around the early works construction zones in Cromer
Parade and . We encourage you to contact us with suggestions on how we
can improve these detours or the information about them for you.
· Construction of a new sealed section of the Greenways shared use path through
Reserve to Nairne Terrace. 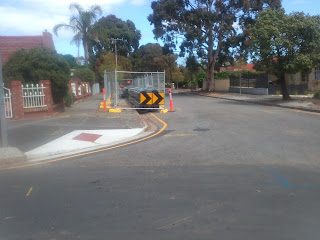 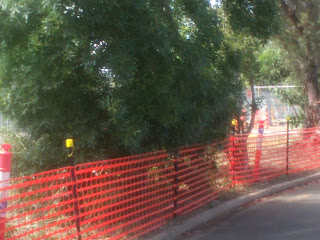