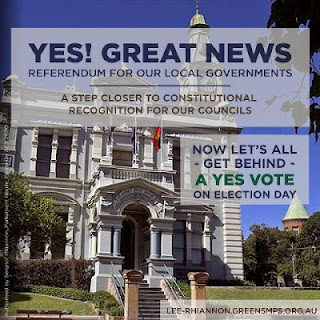 Julia Gillard announced today that she will include a
referendum regarding Constitutional recognition of Local Government at the September election.
While I am sure much press will follow from this and your letter box will continue to be stuffed with election material long after you have decided how you will vote, this recognition is long overdue. It will mean the Federal Government can make direct payments to Councils rather than the money coming via the state government with all the delays and red tape along the way that add to costs and cause delays. This will be  hopefully, only the 9th referendum since Federation to pass.  Try the link below for the ABC's view.
http://www.abc.net.au/am/content/2013/s3755095.htm
Posted by Jennie at 5:53 PM