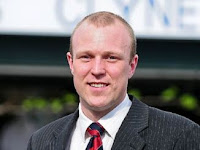 On Friday 16th March Mayor Lachlan Clyne made another brief appearance in the Magistrates Court. This has been set down for further legal argument on the 13th April. It is my understanding that Michael Abbott QC will argue that he doesn't have a case to answer at this time. Mayor Clyne indicated again that he would plead not guilty. It is my opinion that the matter should go to trial sooner rather than later, the longer the matter drags on the more the good name of the Council is associated with this matter. This is always the first question that members of the Community have when they see me at work, shopping or in the neighbourhood; it's hard to answer with a positive swing. Lachlan is charged with dishonestly dealing with documents and improper use of another identity, arising out of 2010’s local government election campaign. The maximum gaol term if convicted is 10 years.
Posted by Jennie at 7:59 AM