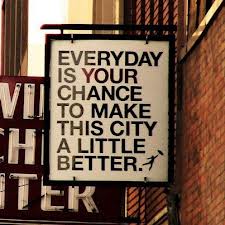 There have been many discussions of late about the structure of our meetings and advisory groups. Many Councillors have expressed a desire to have more frequent Council meetings rather than a City Strategy and Full Council. There seems to be little discernible difference between the content of the two. The key difference being that recommendations made at City Strategy can be reserved out for further discussion at the following Council meeting and decisions made at Council are considered to be final. They can be rescinded but the process is a little more complicated.
We also need to discuss who will be on each committee for the following 2 years (until the next election). The Development Assessment Panel was selected at last month's Council meeting ahead of other positions. There was no valid reason to do this other than an officer had erred in his judgement. The result was that despite a desire for change from a majority of members the existing panel was re-elected. This seems like a contradiction but with our current voting system both can be true. It's certainly time we used a fairer system.
The other things to be considered are;
Do we need a deputy mayor?
Should positions be rotated so that the best aren't hogged by the few?
How long should one serve on a committee if others want  a chance at the same position?
Should the chair of the new committees be paid more money?
What advisory groups do we need?
What should be the future of the Goodwood Oval Advisory Group?