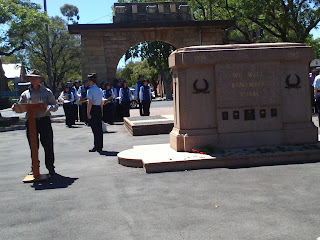 I attended the moving ceremony at 11am this morning at the Memorial Gardens in Unley. This event seems to rarely fall on a weekend and I had not attended one before.
Usually I attend the ceremony at the school in at which I teach. All the pines on the western side of the Urrbrae school oval were planted in remembrance of fallen former students. 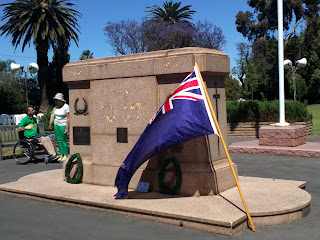 The ceremony was attended by at least 200 people including veterans and their families, school children, the scouts and guides from Clarence Park, Councillors and Mayor and  many other interested people. I was proud to be wearing my father's medals, he was in the navy in World War 2 and lost his battle with cancer 15 years ago.