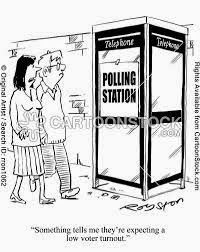 At the Local Government Association Annual General Meeting held on Friday last week the meeting agreed to investigate online voting for local government elections. The hope is that this will encourage more people to vote. The statistics for voting in South Australia show that only 32% of people vote. In Tasmania about 56% vote! what is the difference? In Tasmania (as in most of the eastern states) local government elections are run or party lines, that is that the Liberal and Labor Parties select candidates of their choice. People then have only one decision, do I vote Liberal or Labor. In South Australia politics is yet to infiltrate local government and each candidate runs on their own personal merit. People then use the excuse that they don't know the candidates and, therefore, don't vote.
I don't know how this trial be be managed or if it will be ready for this year's election: if it isn't then it won't be trialled until 2018 and couldn't be introduced until 2022. The wheels of local government turn very slowly.
The solution to get more people to vote is easy, make it compulsory. Why should local government be any different in this matter than state or federal elections? I have raised this with my colleagues many times and they do not support this type of change. 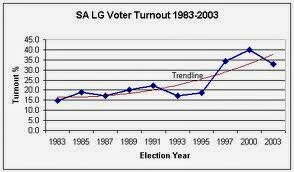