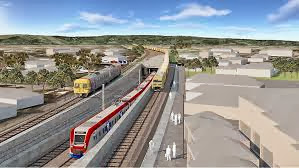 Today's Advertiser is full of stories about trains; train funding, train delays, too few new trains and a bit of a blame game all round. The facts seem to be that the Seaford line is still funded and will be complete with some trains running in December. However, these trains will be the old diesel trains until at least February next year and then the electric trains will run as well as the diesel trains. The 6 new trains are simply inadequate in number to provide the promised 15 minute services. What happened to the other new trains?
Also while the gantries are already being constructed on the Tonsley line  the project might be mothballed as the Federal Govt withdraws their share of the funding. The articles didn't make it clear if diesel trains might continue to service the Tonsley line. Some of this might alleviate, in the short term, some of the almost inevitable congestion at Leader St; the boom gates may be down  a little less often than predicted.
Let's hope that the Federal government might spend their money on a much needed flood mitigation project that will actually benefit Unley residents.