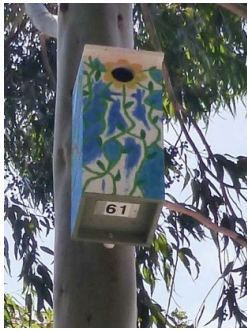 Aware of the impact these works would have, DPTI and Council have worked collaboratively on a Community Wildlife Project to provide nesting boxes through neighbouring streets, schools and private properties adjacent the rail corridor. Fundamentally the aim of the project was to provide alternative nesting sites for fauna that may have been displaced by the loss of vegetation, specifically trees from the rail projects.

DPTI worked with a Zoologist (James Smith) who teamed with schools within the area to build nesting boxes. These boxes have been placed in trees near the rail corridor (Goodwood Primary School, Forestville Reserve, Black Forest School, Devon Street & Railway Terrace, Lyons Parade, Cromer Parade and Goodwood Oval). The Council has supported this project and agreed to take on board the longer term maintenance of these boxes. In total 42 fauna boxes are located in trees near the corridor as part of this project.

Council already has 52 boxes located throughout the rest of the City (predominately to the east of the City). With the additional 42 provided from this project we are now close to 100 fauna boxes throughout the City.
This si one good news story from the project, the nesting boxes look lovely and, hopefully, we will get a report soon to say who has been making their home in them.