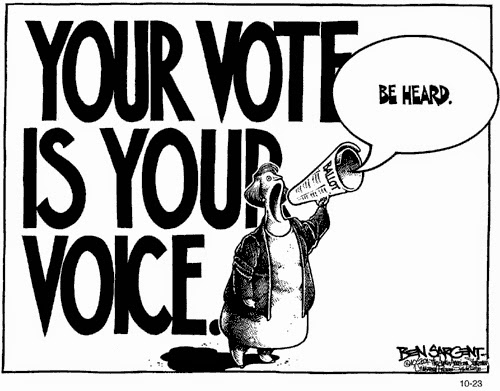 I read an interesting summary by the Local Government Association (http://www.lga.sa.gov.au/webdata/resources/files/LGA_2010_Local_Government_Election_Survey.pdf)  on a post election survey completed after the 2010 election. As you know the voting is postal  and non compulsory. The voter turn out in Unley at the last election was about 30% even after many of eligible voters failed to re-enrol . If these were again included ( a private members bill is before the parliament on this) the voter turn out would be even lower. Many people choose not to vote as they have;

However, the reasons why they vote are ;
The information on why they chose a particular candidate were also interesting as this was often only decided on personal knowledge and information in the election pack and not the pamphlets stuffed in your letter box.
Why do you vote?
Why have you chosen not to vote in the past?
What do we need to do, first of all to get you to vote and then to vote for a particular candidate?
Posted by Jennie at 9:53 AM