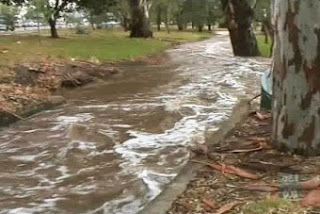 All residents likely to be affected by the 1:100 year flood mitigation project will be letter boxed later this week with a Fact Sheet that clearly explains the amount of work necessary to, as far as possible, prevent flooding in the City of Unley and downstream (West Torrens). These works include a Part A, that has now been approved by the Stormwater Management Authority (see link below), and Part B which may or maynot include a dam in the upper reaches of Brown hill Creek. This document will clearly define the size of culverts required in either scenario. It is important to note that the part A works were widely consulted in late 2011, Unley had several Open Days, and received representations at that time.
Unfortunately, everyone seems to remember the No Dam debate as the supporters of this gained extensive air and media time and gained over 5,000 signatures on a a petition, and no one seems to remember what the rest was about. This did include culverts, at that time, in Arundel, Ave, Chelmsford Ave and Oakley Ave (in Goodwood South).  I received only one complaint. The works no longer include the streets west of the railway line as these can not be constructed due to both the railway works and the fall of the land.
When you get your pamphlet please add your comments to this blog or send me an email if you need further clarification. Don and I intend to door knock the immediate area after you have had time to digest the information.
http://www.abc.net.au/news/2013-02-28/councils-agree-on-stormwater-planning/4544772
Posted by Jennie at 9:56 AM